It’s the beginning of the year, which is a great time to identify what iOS devices and operating systems you should support for upcoming iOS app testing.

The iPhone 12 and iOS 14 have been available for a few months so now it’s time to take a look at the statistics and usage; using this data allows us to prioritize the right OS and device coverage. Testing on the right amount of devices and the different operating systems is crucial if you want your customers to access your products.

The iPhone has evolved a lot over the 14 years since it was first introduced. Take a look at our free infographic at the end of this post to compare previous models.

Although it’s been a strange year, that hasn’t stopped Apple from moving forward. Apple released iOS 14 on September 16th, 2020, and it was quickly adopted by iOS users. The iPhone 12 line followed soon after, with the iPhone 12 and iPhone 12 Pro available October 23. The iPhone 12 Mini and iPhone 12 Pro Max were released on November 13th. This launch was a little behind the typical Apple timeline, so it’s not surprising that the iPhone 12 line might need more time to see higher adoption rates. It’s still a good idea to include these newer devices when testing iOS apps, as they’re likely to become more popular over time.

If you’d like to know more about iOS 14 and the iPhone 12 line, check out our blog post on the subject.

For new iOS versions, you typically see a faster adoption rate than Android, and 2020 was no exception. Within the first five days after it was released iOS 14 was adopted by 26.81% of users. In that same timeframe the previous year, iOS 13 only achieved 20% adoption.

Apple recently released iOS and iPadOS usage stats in December 2020. For iPhones released in the last four years, 81% of users are on iOS 14. Most of the remaining users on newer iPhones are on iOS 13 (17%), with only 2% of those devices running on earlier OS versions. 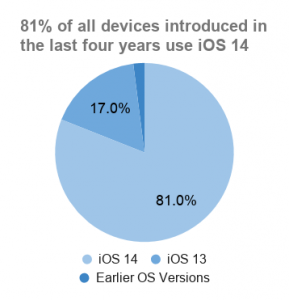 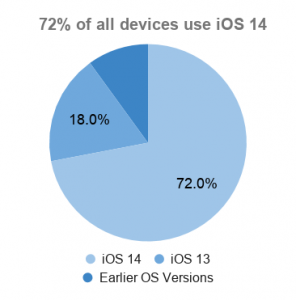 For all iPhones, 72% are on iOS 14. Although newer iPhones are quite popular, there are still many users on devices released over four years ago, including devices that aren’t supported by iOS 14. In total, 10% of iOS devices are on an earlier OS version. 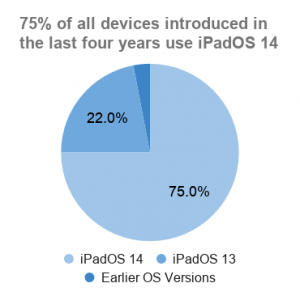 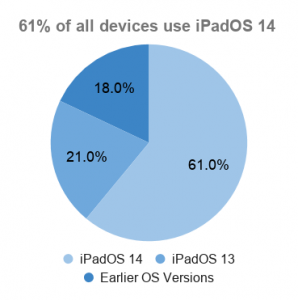 Although both iOS 14 and iPadOS 14 have been adopted on most devices, there are still many Apple devices on earlier OS versions. For this reason, it can be helpful to test on older iOS versions and devices, as they are still in use by Apple users.

We’ve included a graph to demonstrate how quickly iOS 14 was adopted by newer iPhone users. This data was provided by Mixpanel, which creates an estimate based on website and app usage analytics.

Although these numbers indicate that 81% of iPhone users have upgraded to iOS 14 in a fairly short time, that still means that almost 20% of iPhone users are using iOS 13 or older OS versions. It’s always important to consider this when planning for device and OS coverage. The best practice is to go back at least one OS version to make sure that your app is stable for more users.

Most Popular iPhones in 2020

We’ve included this chart of the most popular Apple devices in 2020. As you can see the iPhone 11 line of devices has been popular all year, according to data from Mixpanel.

Despite these being the top iPhones last year, it’s always important to include other, older devices in your test plan. While the new iPhone 12 line is gaining traction, you can see in the visualization that older devices (such as the iPhone 8, iPhone 7 and the iPhone X) are still more popular among iOS users.

In a little over a decade, Apple has released dozens of different models. If you’d like to review the list of devices, click on the link below!

Don’t have the devices and the expertise to do scale testing for your iOS apps?
Please reach out to us to see how we can help you! 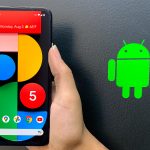