As we are approaching the 2020 holiday season, tech companies are announcing new phones. This month Apple is releasing the iPhone 12 and just announced the different models and price of each device. In addition to that Apple recently released iOS 14.So let’s take a look at the most popular iOS devices and also the new iPhones from Apple for 2020.

Earlier this year we posted an article about the Top Devices for iOS App Testing in 2020. At that time the most popular iOS device was the iPhone XR followed by the iPhone 7.

A few months later the iPhone 11 has now surpassed the iPhone XR and is currently the most sold smartphone worldwide according to Apple Insider. Meanwhile, the larger screen size of the iPhone Pro Max has also been quite popular among iPhone users.

Based on the number of smartphone shipments shared by Apple Insider 4 iPhones are in the top 10 of the most shipped devices in 2020, including the 3 different iPhone 11 models.

Going back to the iPhone users only, if you look at the chart below released by Mixpanel you can see the progression of the iPhone 11 in 2020, from January until October 2020. What this means for 2021 is that the iPhone 11 models will be most likely the top iOS devices for a while until the iPhone 12 models catch up on it, which may be sooner than expected based on reports from an expert analyst. Macrumors reported that the preorders for the iPhone 12 were more than double that of the iPhone 11.

That said keep in mind that half of the iOS users are still on devices previous to the iPhone X and that Apple tends to support older iPhone models for a while.

A quick look at iOS 14 adoption.

If you are keeping up with our blog you probably read our post about iOS 14 features a few weeks ago. Now that iOS 14 has been available for a few weeks let’s take a look at the adoption rate.

Based on information shared by 9to5mac.com and MacRumors.com, iOS 14 was quickly adopted during the first week. Now a few weeks later iOS 14 is tailing iOS 13 with more than 42% of iPhone users on the recent operating system version.

With the release of the iPhone 12, you can expect a lot more users on iOS 14. So within a few months we can imagine that the majority of iOS devices will have updated their iPhone to iOS 14.

The major feature of these phones is the introduction of 5G. Apple’s 5G boasts that consumers will be able to connect to WiFi faster, have quicker uploads & downloads, improved FaceTime video definition, and more reactive gaming–all while maintaining power efficiency. This efficiency will be improved through the new “Smart Data Mode” that will help balance and regulate power, usage, speed, and data which gives consumers a longer battery life. These functions are all possible due to the introduction of A14 Bionic, 5nm node technology.

The phone itself will have an improved XDR retinal display with OLED (which will make the imagery more defined and richer in color and darkness), a more durable Ceramic Shield with smart glass, and industry-leading water resistance. The Pro will come in 4 colors: Gold, Silver, Graphite, and Pacific Blue, and the iPhone 12 and 12 Mini will be available in 5 colors: Black, White, Blue, Green, and (PRODUCT) Red. While consumers have the option to purchase the Mini which is comparatively smaller in size, the standard iPhone 12 will still be 15% smaller, 11% thinner, and 16% lighter than the iPhone 11.

With Apple’s effort to reduce their carbon footprint, they will stop including EarPods and the power adapter in the phone’s box. Additionally, Apple manufacturing partners will be transitioned to Renewable Energy. Because the power adapter will be magnetic, Apple will launch additional MagSafe Accessories. These accessories allow consumers to customize their phones with external features like cases and wallets.

If you are interested in reading more about the different iPhone 12 models, visit TechCrunch website who compared the new iPhone models.

With this new iPhone 12 and iOS 14, Apple remains at the front of the stage with their new smartphones. In addition to that, new versions of their iconic iPad were released last month.

Over the next few months it will be interesting to see how many units of iPhone 12 are sold by Apple and the improvements in the user experience for their end users.

Don’t have the devices and the expertise to do scale testing for your iOS apps?

Please reach out to us to see how we can help you! 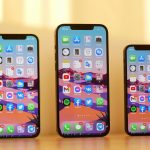